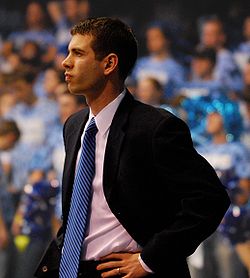 Brad Stevens coached his little-known Butler University team about as close to victory as you can possibly get without winning.  In one of the best NCAA College Basketball Championships ever played, Duke (whose annual basketball budget is 7 times Butler’s) managed to squeak by Butler University with a mere two point lead.  And that lead was in doubt until the final seconds.

As Wikipedia notes, Stevens joined Butler basketball program as a volunteer prior to the 2000–01 season after quitting his job at Eli Lilly. In 2010, his third year as head coach, Stevens broke the NCAA record for most wins in a coach’s first three years, exceeding the previous record by eight. At 33 years old, Stevens became the second–youngest head coach to coach in the NCAA National Championship game, losing 61-59 to Duke.

Great wisdom repeated by a great young coach.  And that wisdom applies to YOU too!