Several weeks ago I spoke to a group in Houston and I showed them the pictures below. 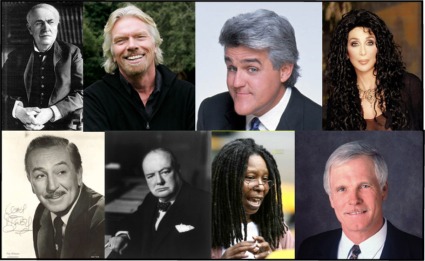 Then I asked the audience what they all had in common.

There were quite a few answers from the audience and they were all wrong. It was only after I pulled out $100 and offered it as a prize that a person in the back overcame his fear of being wrong and volunteered the correct answer….

….they were all dyslexic!

I pointed out that the role that made each of them famous also required a lot of reading. Do you know how hard it is for a dyslexic person to read?

But not a single one of those great people that I cited let dyslexia keep them from being all they were created to be.

That’s why one of my most favorite quotes is, “It’s not what you are that holds you back, it’s what you think you’re not.”

I use that quote by Denis Waitley virtually every time I speak to an audience.

Because it really speaks to the problem I think most people have in struggling for success — they believe they’re lacking something that if they possessed it would make them successful. When the truth is, they already possess everything they need to be successful hey just need to learn how to use it to their advantage.

One of the easiest ways to change a limiting belief is to study the “evidence” — find the truth. The Internet makes it so easy to research that particular challenge you find limiting. Look for people who’ve gone on to great success despite the same challenge. Study them in depth and model what they did to achieve their goals.

And please never forget this, “It’s not what you are that holds you back, it’s what you think you’re not.”

For one of Denis Waitley’s greatest programs go here….